All the babies I might have had I is a red hand knitted and felted soft sculpture which resembles a web. To date it has been installed five times by suspending it; it relies on gravity and tension to transform it into a sculptural piece. However, when it is not suspended it still has some sculptural form. The reference to ‘tension’ when applied to knitting is apposite!

I knitted it as part of my final piece for my Art Foundation course in 2011, when I began to understand that it was possible to make conceptual art with knitting. It was a revelation, and very liberating. I knitted it in pure wool, knitting a series of holes radiating out from the centre. I used double pointed needles and hundreds of safety pins as stitch holders. I was truly ambivalent about felting it as it was fabulous as a knitted piece, and obviously also much larger. However, at that point, I decided I wanted my work to be less recognisable as knitting, and more sculptural, so I felted it. I am so glad I did as it became something ‘other’. 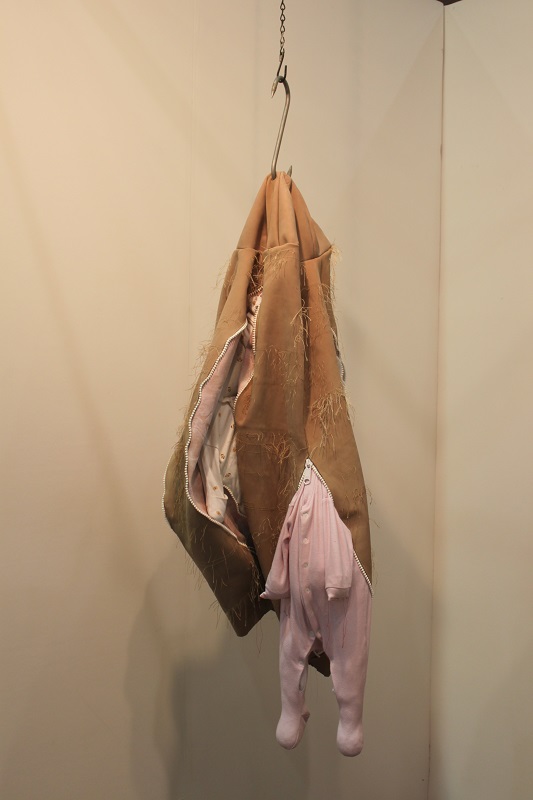 All the babies I might have had II, 2015, leather. imitation leather, used clothing, hand knitted felt, zips; stitch

One of the most endearing aspects to this piece for me is that each time it has been installed it has been very different:

2011: For the end of year show of my Art Foundation course it was part of a diptych with a life sized canvas torso. I stitched the knitted web to the floor, walls and wooden support in a purpose built space so that it obscured the torso which was mounted on a tall plinth behind it. It was very effective. 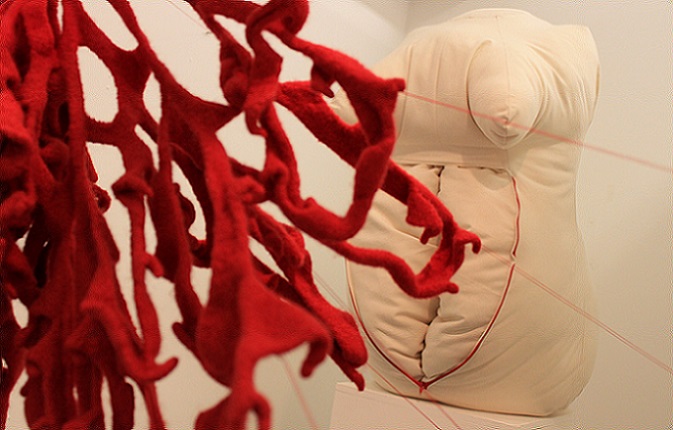 All the babies I might have had I
installed as part of a diptych with a canvas soft sculpture
at my Art Foundation Show, at Bristol School of Art, June 2011

2012: As part of my degree, I set up an exhibition, Align, in one of the corridors at the Bower Ashton campus at UWE with a group of other students. The corridor featured several balconies, so I stitched All the babies I might have had I to a piece of string, using thick red thread as an extension of the sculpture. It was then suspended over a balcony and some of the tendrils were tied to the metal supports of the balcony with the same red thread. I added some loose hanging threads too, which were visually pleasing and also suggested elements of unravelling. 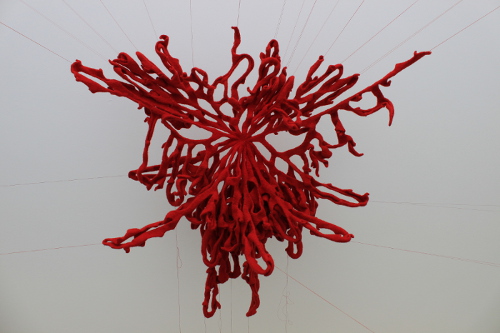 All the babies I might have had I
installed at Align at UWE's Bower Ashton campus, 2012

2015: I was asked by a couple of students, Jennifer Dudley and Eloise Dunwell, on the MA Curating course at UWE if they could install my piece at Symbiosis. I was naturally delighted and gave them permission to install it however they chose. They used transparent monofilament and stitched it to some structural metalwork which was part of the venue. It was very compelling! 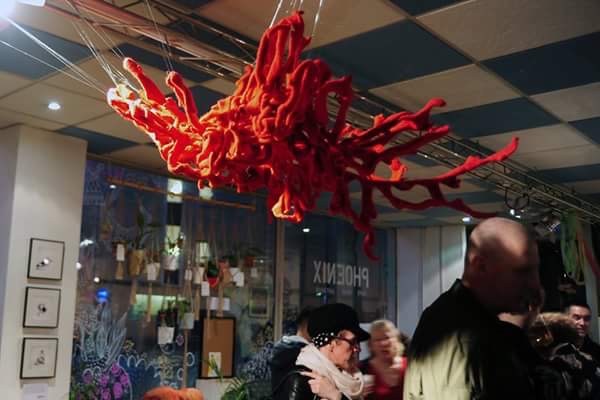 All the babies I might have had I, installed at Symbiosis, 2015

May, 2016: It was selected by Nicola Pearce and Laura Waite as part of a call out for Pattern at Fringe Arts Bath. This time I installed it again, in consultation with the curators, stitching it into the window space of a disused shop using the fabric of room– the light fittings, ceiling tiles and any holes and spaces I could find. I was especially interested in this hang as a response to a particular space. It makes me want to stitch a room…. 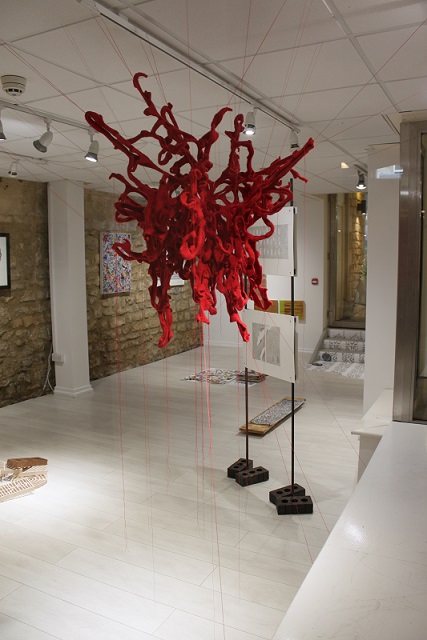 All the babies I might have had I,
installed at Pattern, Fringe Arts Bath, 2016

October, 2016: For Unravelling: an exhibition of knitting and crochet art , I installed it by attaching it to the wooden frame of one of the windows using screw-in eyelets: 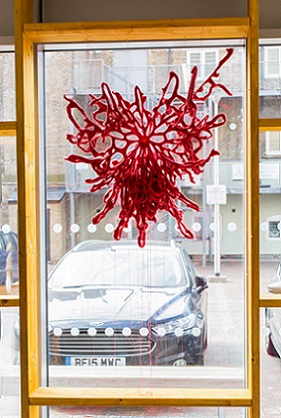 All the babies I might have had I, installed at Unravelling, Oct. 2016

2018: At Subversive surfaces exhibition at Town Hall Arts, Trowbridge, it was installed spanning the grand staircase in the entrance hall. 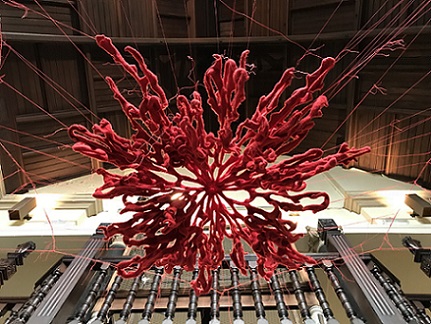 All the babies I might have had I at Subversive surfaces, June/July 2018

There is something deeply pleasurable about installing this piece. It’s slow, repetitive work, but it is skilled, intuitive and mesmerising; it becomes meditative, and, for me, I quickly enter Csikszentmihalyi’s state of flow.

It makes me realise that knitted and felted soft sculptures can be very flexible, obviously literally, but also in response to any given space. Have a look at my Installation and site responsive works page and my blog post, Art in unexpected places.