Giant genitalia; in defence of the zip, one year on

I have recently been asked to do a presentation about my work and it has set me thinking again about why I use zips in my work and how I ended up sculpting what many people see as giant genitalia! I also realised that, although I have addressed these questions thoroughly over the past couple of years, I haven’t explained myself publicly. So I’ve reworked a piece that I wrote almost exactly a year ago, in response to the reactions of the public to my work at The Knitting and Stitching Show at Alexandra Palace, London. I clearly felt I needed to explain this aspect of my work at the time as I wrote it for my press pack for the Harrogate show, four weeks later! I have taken the liberty of editing it, of course, as time changes everything.

I am aware that for many people, being confronted by 6 foot genitalia, maybe particularly at The Knitting and Stitching Show, could be problematic. I was very nervous about exhibiting my work at the first show, in London, as I was fearful of disapproval, but I was surprised and thrilled at the range of responses my work provoked – hilarity, embarrassment, thoughtfulness, incomprehension, sorrow, desire, revulsion, horror, fear, shock; the list goes on. I had many in-depth conversations, shared stories, hugs, laughter and a few tears. I was delighted at the strength of feeling the sculptures inspired. And the responses certainly challenged my prejudices; the kinds of reactions my work received were very varied, seemingly regardless of age, gender, ethnicity or any other discernible grouping.

My original intention was not to sculpt life-sized genitalia but I quickly discovered that many people see the open zips as vaginas and others see erect phalluses in my leather sculptures. There is evidence throughout my sketchbooks as I was developing this body of work that I was aware that my sculptures were either ‘too vag. like?’ or ‘too phallic?’ so what made me continue? It made me laugh, and still does, but I realised I would, at some point, have to be able to explain why I was making these troubling forms. Certain aspects of it still make me feel uncomfortable at times; I’m not sure I want to be known solely as the artist who makes soft sculptures of giant genitalia!

My work is intentionally provocative. I have spent several years researching materials and processes to find ways to evoke an abject response using cloth and stitch. I have worked hard to get my work to provoke a range of strong reactions; shock, horror, sadness, loss, but, hopefully, also some hilarity. I am aware that for many my sculptures will be reprehensible; but they are also humorous. It is that balance which is important to me. That some people see enormous, exaggerated genitals when they look at my work, hopefully adds something to that somewhat precarious question of balance. There are clearly taboos associated with genitalia which evoke a very strong abject response, and maybe for some people, in some settings, that will be too much. But my work will get a response!

All the babies I might have had II, 2015, detail, leather, imitation leather,
used clothing, hand knitted felt, zips; stitch, print

I think I have actually succeeded in creating a troubling tension between repulsion and attraction.  Choosing to use surfaces which intentionally blur the visual/ haptic divide means that people constantly tell me they want to touch, feel, climb inside these disquieting forms. And yet they simultaneously find them repulsive. Maybe there is a deep psychosexual longing within all of us, and maybe, as part of my individuation, I am expressing it in my work in rather an extreme way? I’m sure Freud would have had a lot to say about my work!

My work challenges stereotypical, gendered expectations of work with textiles in many ways. It blurs the boundary between craft and fine art by using traditional embroidery and garment-making skills to create subversive sculptural forms which evoke an abject response and create an uneasy tension in aesthetics. My emotive forms and gestural embroidered stitches excavate the possibilities of there being a dark side to the perceived notions of embroidery as a gendered, decorative, safe, clean, perfect and private pursuit. That many people see genitalia in my work amplifies this sense of discomfort.I am making public things that are normally extremely private.

My sense of humour is possibly rather weird too; I think it’s funny that I have made a series of enormous, surreal sculptures that people see as genitalia and I call it a self-portrait. It makes me smile inwardly too when people are shocked and ask me what my sculptures are. I tell them, ‘They can be whatever you want them to be’.

And as to the zips, either I had to stop using them or I had to embrace the vaginal form as part of my work. And what could be more appropriate? I am a woman, I am a mother and I am a feminist. 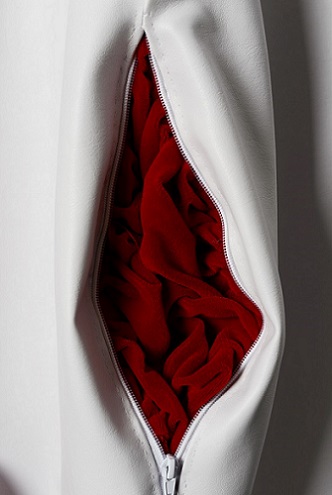 I didn’t want to lose the zips as they have become an integral part of my work. I have used them for a number of years for several reasons:

When I discovered continuous zipping, I realised that there is no limit to the size of the zips I can make. political symbol instead of a point of sexual fixation.Manipulating the vibrant and luscious red velvet by ruching it was the start of it, and, after that, it was too tempting not to emphasise the vulva-like form by using other flesh-like colours, surfaces and contrasts. There is also more than a fleeting reference to the fearsome ‘vagina dentata’ of myths in the teeth of the large zips. Deciding to use baby grows stitched into zips in my most recent flesh-like sculpture, entitled All the babies I might have had, was clearly another provocation. I had clearly chosen to take on the giant genitalia challenge. But there is a serious side.

A short history of the vagina in art

It has been widely recognised throughout history that the patriarchal hierarchy of ‘high art’ has objectified and fetishised the female body through the male gaze. I realised I had to research the work of other artists who depict female genitalia in their work. I like to call it ‘vag. art.’

With the rise of feminism in the 60s and 70s, the vagina’s representation in art changed as women artists began to make references to it in their work. This wasn’t something new, as the work of Georgia O’Keefe, for example, seemed to represent the intimate female parts, but it was different in that the vagina became a cpolitical symbol instead of a sexual fixation.

However, theories of representation have changed since the 1970s when John Berger (1972:54) and Laura Mulvey initiated discussion around the idea of the male gaze (Stafford in Carson and Pajaczkowska, 2000:235). In the 1980s both Kaplan and Silverman argued that ‘the gaze could be adopted by both male and female subjects: the male is not always the controlling subject nor is the female always the passive object’ (Chandler, 2000) and in 1999, Perry proposed the idea of the ‘female’ gaze’ (p 29).

Feminist ideology has also changed dramatically over the past 30 years, as has the ideology of the art world, and each has influenced the other. In 1997, Heywood and Drake described the ‘third wave’ of feminism as a ‘movement that contains elements of second wave critique of beauty culture, sexual abuse and power structures while it also acknowledges and makes use of the pleasure, danger and defining power of those structures’ (1997, p3) and alongside this has been the emergence of so called ‘post feminism’, a reaction to second wave feminism, described by Adriaens as a

‘new form of empowerment and independence, individual choice, (sexual) pleasure, consumer culture, fashion…humour and the renewed focus on the female body…which is located on the crossroads between post modernism, post structuralism and post colonialism’ (2009).

Vaginas seem to be represented widely in art now, by both men and women. The artists clearly have different intentions in using this symbol of womanhood, but it seems that the main purpose is empowerment. Naturally, though, it is still regarded as being controversial in many quarters.

The phallic forms developed from the shapes of the leather hides. Working intuitively, I cut and stitched the leather in ways to minimise any waste and soon realised the inevitable! The colour and texture of the leather, as well as the form, emphasises their phallic nature in a highly disturbing way. However, when I inspect my original source material, the photo cut-outs, I see these same phallic forms. Maybe vaginal and phallic shapes are ubiquitous? And maybe my experimentation with texture and colour has somehow emphasised these meanings in my work? 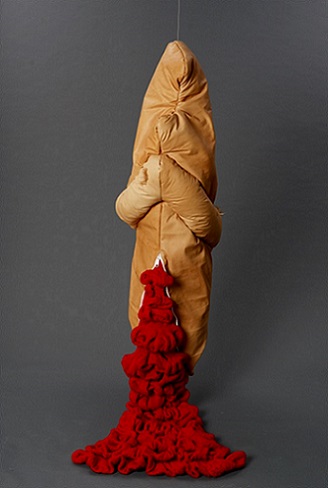 ‘Do more. More nonsensical, more crazy, more machines, more breasts, penises, cunts, whatever – make them abound with nonsense. Try and tickle something inside you, your ‘weird humour’. You belong in the most secret part of you. Don’t worry about cool, make your own uncool. Make your own, your own world.’ Le Witt in Lippard, 1976

This really resonates with my perception of this body of work, and the way I have approached it. Although there is a humorous aspect to it, it has also been my obsession for the last couple of years. Deciding that this series of sculptures was actually becoming a self-portrait is possibly the most disturbing thing, or should be! Do I see myself as a cluster of giant genitalia (what’s the collective noun for genitalia?) Absolutely not. For me, sculpting with stitch in the intuitive way that I do, has given me an amazing freedom to analyse and reflect upon ‘the most secret part of me’. Playing with materials and being led by what they do, these sculptures have been formed intuitively, becoming an oddly mismatched series, a disturbing installation, my dark side, my Frankenstein’s monster. They have a life of their own. 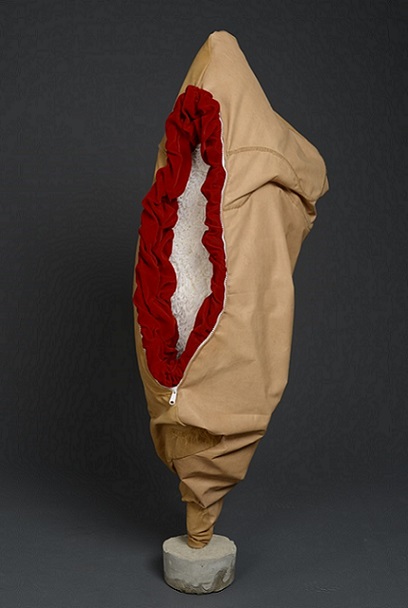 But my initial intention was not to make giant genitalia. I like to think my work has many other layers of meaning, but, it seems, this is one major way they can be interpreted. And frankly it can be a significant distraction from the other meanings for many people. I am interested that, a year on, I am definitely more embarrassed about these sculptures again in certain settings. I’m definitely missing the bolstering of confidence, shared understanding and intellectual discussions that working in a University environment fostered, from tutors and peers alike. I noticed last week that I was reluctant to put a full frontal image of Other 5, for example, on the recent presentation I’ve been preparing. It has been a great relief in my last 2 exhibitions, Bodies and Unravelling, to not have to field questions about genitals from the public! I also think carefully now, before I submit the leather sculptures especially, Other 4 and Other 5, to any callouts, as they seem to be the most graphic. The last thing I want to do is offend people, but I do want to make people think. And that’s a fine line to tread.

So what is the place of the zip in my work in the future? It interests me that my recent work has moved away from the zip, but I can’t say for sure that it’s gone for good. I suspect that when I start stitching again, it will be back with a vengeance. I’m not sure I can escape it so I will embrace it!