When they selected All the babies I might have had I for the exhibition Pattern at Fringe Arts Bath, the curators asked me whether I could write a bit about it. Their original intention was to cut out quotes in vinyl for the floor as part of the exhibition, so I have written it with that in mind. In the end they didn’t do that, but instead asked if they could put it on the Pattern website. It made me realise that I hadn’t ever publicised these thoughts and that it still makes me feel very vulnerable! It is based on my own experience and naturally provokes a strong response from others. It was one of my first conceptual pieces and it interests me that even then, in 2010, I was already making public that which is normally private, although I hadn’t yet identified that thread running through my work. I still find it a very moving and beautiful piece. I thoroughly enjoy the fact that each time it has been suspended it becomes something other.

Image: All the babies I might have had I, installed at Align, UWE, Bower Ashton Campus, Bristol, Nov. 2012 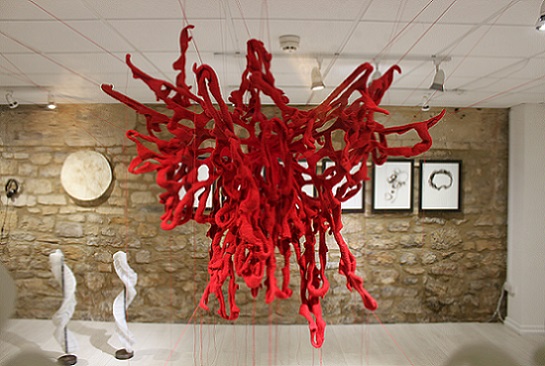 All the babies I might have had I, installed at Pattern, Fringe Arts Bath, May-June 2016

‘All the babies I might have had I was knitted intuitively as a response to an outpouring of the losses associated with childlessness- the anguish of infertility, the grief of miscarriage, the pain of an ectopic pregnancy, the agony over the ease with which others seem to conceive, the longing for a child.

Instead of knitting baby clothes, I knitted holes as absences.

Its form is abstract, organic, flexible, until suspended, when it becomes something other, vulnerable, floating, yet controlled by tension and gravity.

That it has been felted is another change in control. It’s out of my control.

Some people think it’s quite shocking, as knitting is meant to be passive, private and benign. Using knitting to communicate things that are normally hidden creates an uneasy tension. It should be soft, cuddly, functional, but instead it’s hard hitting, difficult, abstract.

Knitting’s meant to be comforting but this is disquieting. 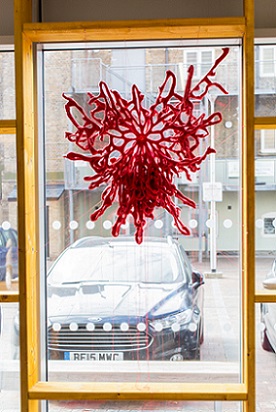 All the babies I might have had I, installed at Unravelling, Bow Arts Ice House Studios, London, Oct. 2016

It’s the dark side of knitting.

It is a memory of all the babies I might have had.

Knitting is a meant to be an easy conversation starter; having to tell people ‘I’m knitting a uterus’ was rather awkward. Sometimes I’d say ‘I’m experimenting with knitting holes’ instead.

It makes me feel very vulnerable talking about it.

I don’t think the sense of loss ever really goes away. It changes with time, but it’s still there.

The colour is the colour of blood.

That something exquisite comes out of this deep sorrow is cathartic.

The title disrupts the viewer’s preconceptions.

The significance of a name.

It would probably be called confessional art. It’s my own story but it’s actually also a story that I have in common with many, many others…. and that helps. I hope it helps.' 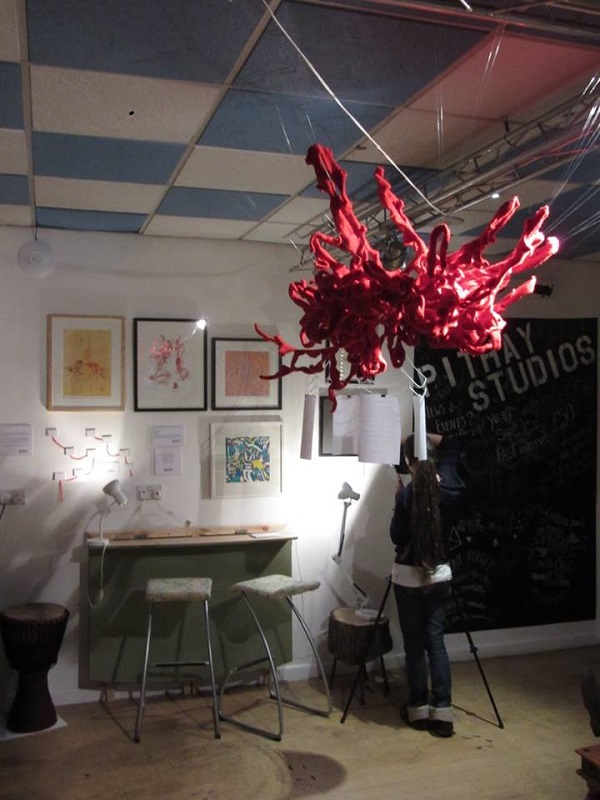 All the babies I might have had I, installed at Symbiosis, Phoenix cafe, Bristol, April 2015