It's the end of my Embroiderers’ Guild Scholar’s year! 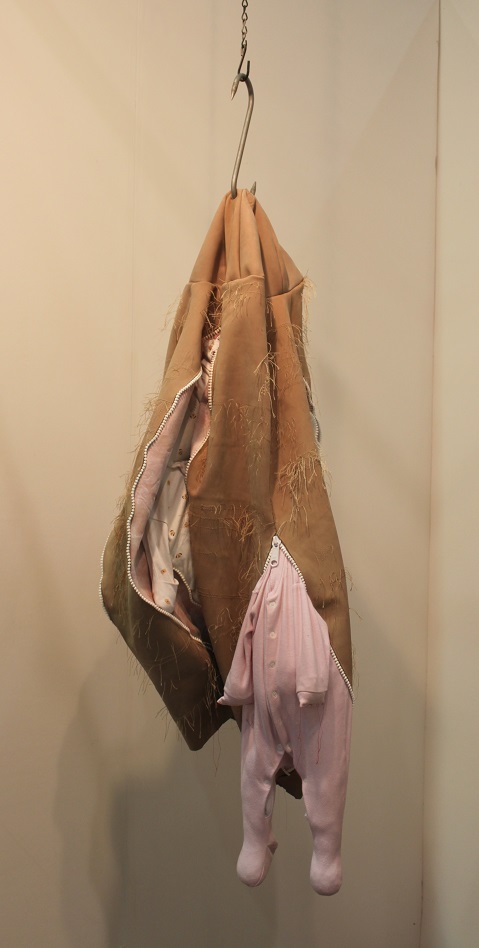 Have a look at The Embroiderers' Guild website for an article about my work, where you will also find a report about my Scholar's year.

Image: Delivering my presentation at the end of my Scholar's Year at The Embroiderers' Guild AGM in Manchester

I have been invited to speak about my work at a couple of local Embroiderers' Guild branches in the next year too.

This year my work has also featured in Embroidery magazine, Stitch magazine and Contact, the EG members' magazine. 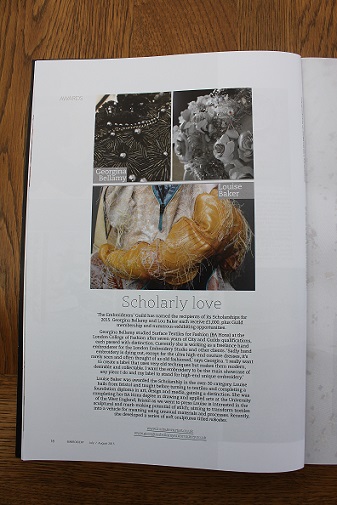 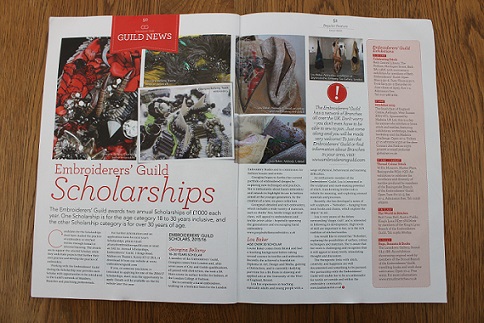 I also wrote an article for Contact in January this year: 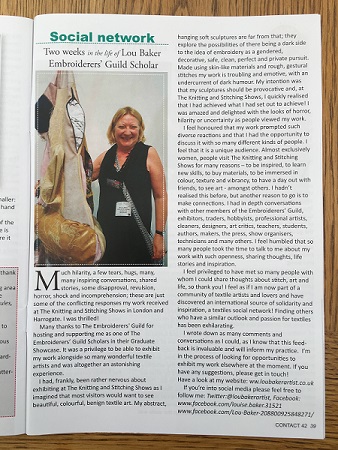 And here is the article:

Social network: two weeks in the life of an Embroiderers’ Guild Scholar 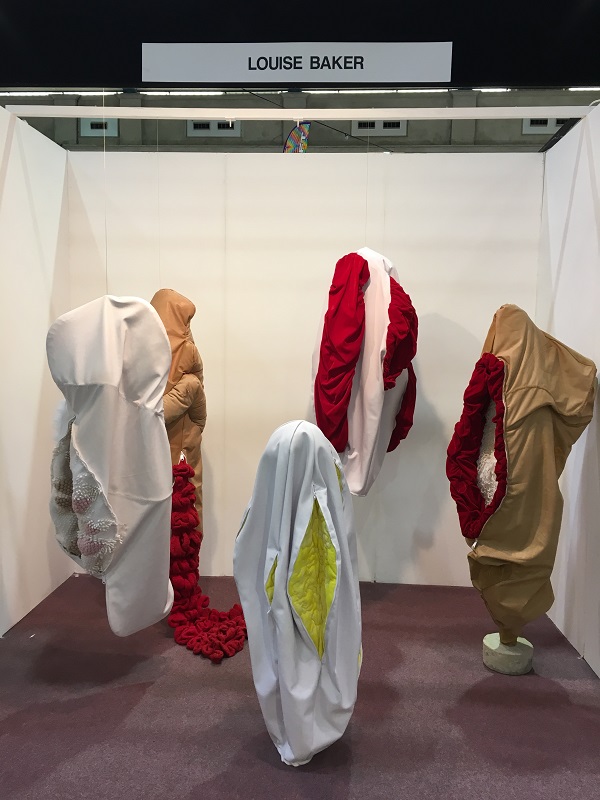 The others: a self portrait, 2015, installed at The Embroiderers' Guild Graduate Showcase, London, October 2015

Much hilarity, a few tears, hugs, many, many inspiring conversations, shared stories, some disapproval, revulsion, horror, shock and incomprehension; these are just some of the conflicting responses my work received at The Knitting and Stitching Shows in London and Harrogate. I was thrilled!

Many thanks to The Embroiderers' Guild for hosting and supporting me as one of The Embroiderers’ Guild Scholars in their Graduate Showcase. It was a privilege to be able to exhibit my work alongside so many wonderful textile artists and to have an audience of potentially over 30,000 in London and 19,000 in Harrogate. It was altogether an astonishing experience. 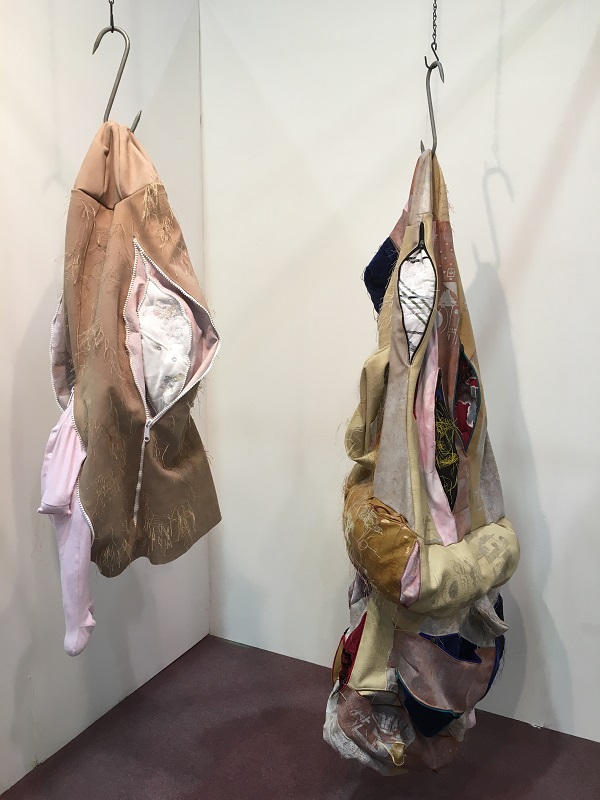 All the babies I might have had I, 2015 and Nobody I, 2014,
installed at The Embroiderers' Guild Graduate Showcase
at The Knitting and Stitching Show, London, October 2015

I had, frankly, been rather nervous about exhibiting at The Knitting and Stitching Shows as I imagined that most visitors would want to see beautiful, colourful, benign textile art. My abstract, hanging soft sculptures are far from that; they explore the possibilities of there being a dark side to the idea of embroidery as a gendered, decorative, safe, clean, perfect and private pursuit. Made using skin-like materials and rough, gestural stitches my work is troubling and emotive, with an undercurrent of dark humour. My intention was that my sculptures should be provocative and, at The Knitting and Stitching Shows, I quickly realised that I had achieved what I had set out to achieve! I was amazed and delighted with the looks of horror, hilarity or uncertainty as people viewed my work. 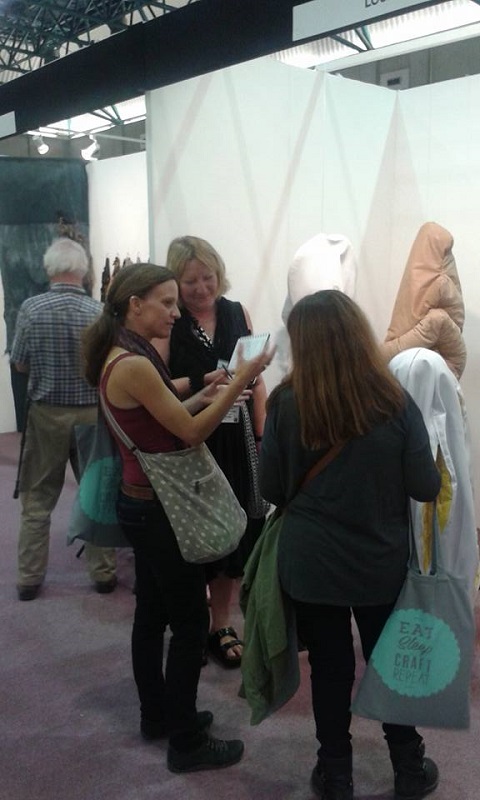 One of many fabulous conversations about my work at the London show.
These 2 lovely people were midwives and they told me the names of lots
of gynecological syndromes that they saw in the drapes and folds of my sculpted forms!

I feel honoured that my work prompted such diverse reactions and that I had the opportunity to discuss it with so many different kinds of people. I feel that it is a unique audience. Almost exclusively women, people visit The Knitting and Stitching Shows for many reasons – to be inspired, to learn new skills, to buy materials, to be immersed in colour, texture and vibrancy, to have a day out with friends, to see art - amongst others. I hadn’t realised this before, but another reason to go is to make connections. I had in depth conversations with other members of the Embroiderers’ Guild, exhibitors, traders, hobbyists, professional artists, cleaners, designers, art critics, teachers, students, authors, makers, the press, show organisers, technicians and many others. I feel humbled that so many people took the time to talk to me about my work with such openness, sharing thoughts, life stories and inspiration. 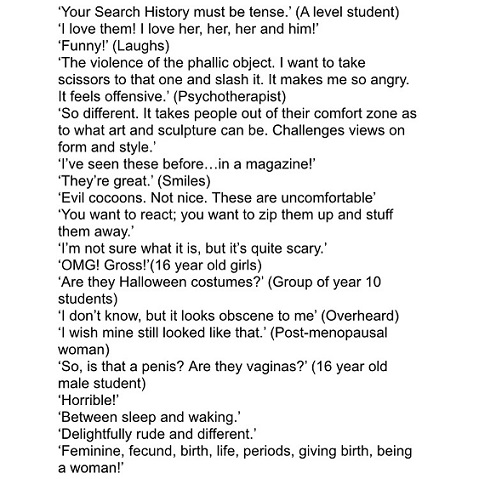 Just a snapshot of the many and varied comments people made about my work. I was thrilled.

I particularly enjoyed getting to know the others on The Embroiderers’ Guild stand - staff, volunteers, graduates and the other scholars.

I feel privileged to have met so many people with whom I could share thoughts about stitch, art and life, so thank you! I feel as if I am now part of a community of textile artists and lovers and have discovered an international source of solidarity and inspiration, a textiles social network! Finding others who have a similar outlook and passion for textiles has been exhilarating. 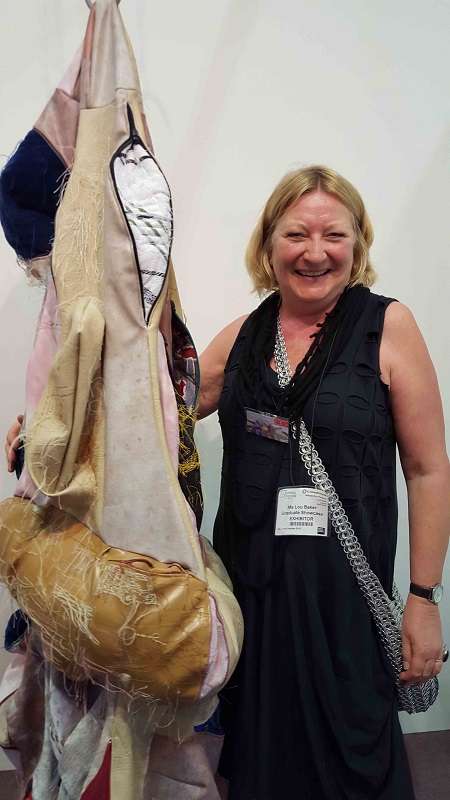 Me with Nobody 1, both installed at The Embroiderers' Guild Graduate Showcase
at The Knitting and Stitching Show, London, Oct 2015

I wrote down as many comments and conversations as I could, as I know that this feedback is invaluable and will inform my practice. I’ve been reflecting since I’ve been home and I know that this experience will have a profound impact on my practice. I’m in the process of looking for opportunities to exhibit my work elsewhere at the moment. If you have any suggestions, please get in touch!