The dark side of stitch

Press release for The Knitting and Stitching Show, Harrogate, Nov. 2015

Lou Baker - The dark side of stitch

Lou Baker’s emotive, life-sized, hanging soft sculptures challenge the seemingly benign nature of traditional textile processes, creating an uneasy tension in aesthetics and evoking the abject. They excavate the possibilities of there being a dark side to the perceived notion of embroidery as a gendered, decorative, safe, clean, perfect and private pursuit. Using soft, impermanent, skin-like textiles in sculpture, with their associations with craft and the feminine, powerfully subverts traditional representations of the body and evokes its mortality, revealing alternative meanings in its folds and surfaces. 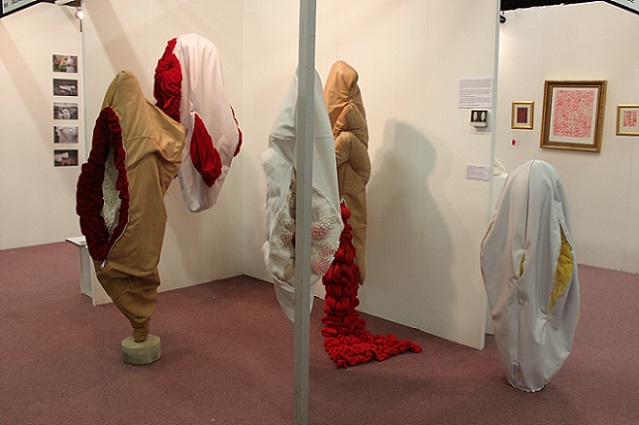 The others; a self portrait, 2015, installed at The Embroiderers' Guild Graduate Showcase at The Knitting and Stitching Show, Harrogate, Nov 2015

For Baker, each stitch is a piercing, a stitched drawing is a tattoo, zips become scarification and printing with a heat press, branding. Her work blurs the boundary between craft and fine art by using traditional embroidery and garment-making skills to create subversive sculptural forms which challenge the stereotypical expectations of work with textiles.

Baker’s troubling forms explore ways that the transformation and manipulation of cloth with stitch can suggest a physical absence and, ultimately, death, the most extreme abjection. The feminist philosopher, Julia Kristeva, describes the abject as the instinctive feeling of horror ‘to a threatened breakdown in meaning caused by the loss of the distinction between self and other’. It is that which inherently disturbs conventional identity and cultural concepts. 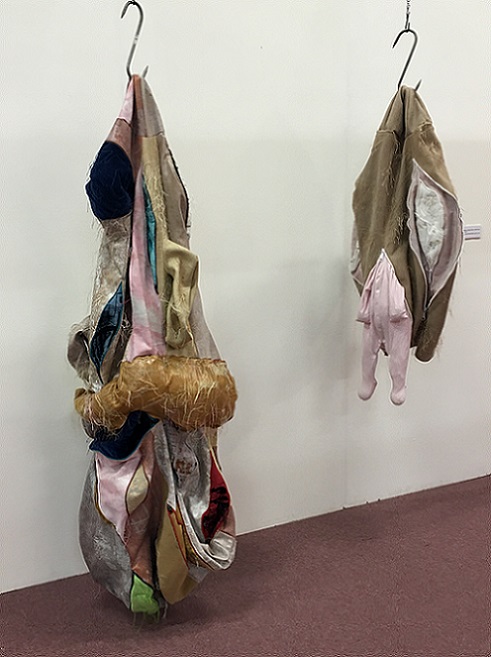 Nobody 1, 2014 and All the babies I might have had II, 2015, installed at The Embroiderers' Guild Graduate Showcase at The nitting and Stitching Show, Harrogate, November 2015

Baker regards her work as a form of self-portrait, a reflective and emotive response to the ongoing excavations of her dark side; an embodiment of a mid-life crisis. It is also therapy. Carl Jung describes individuation as a process, which, he says, needs to occur in the second half of life, of finding meaning in life. It is ultimately a preparation for death. He talks about balancing our multiple selves with the dark side, or shadow, of ourselves, and maintains that failure to acknowledge and accept this shadow can result in fragmentation and associated mental health issues. He also describes the shadow as being the seat of creativity.

For Baker, the therapeutic links between stitch, creativity and happiness are vital. When she stitches or knits, she very quickly enters a state of meditative timelessness which induces a profound sense of wellbeing. The psychologist Csikszentmihalyi describes this experience as the state of flow. It is caused by deep concentration, where levels of skill match levels of challenge. It is often linked to creativity and, ultimately, to happiness. 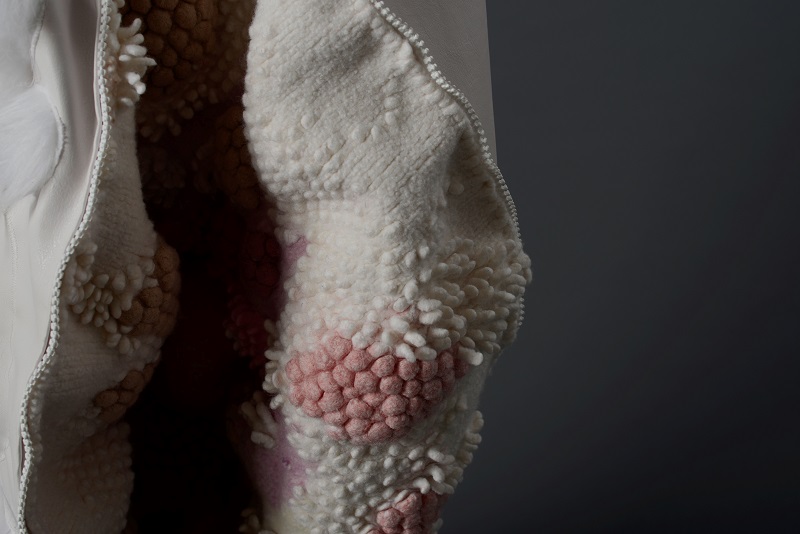 Individually, the sculptures are aesthetically pleasing yet troubling; as a series they are imposing, an uncanny bodily presence. Baker has successfully produced a disturbing tension between repulsion and attraction through the materials and process ‘ges she has chosen and by the careful consideration of similarities and contrasts in form, colour and complex surfaces. This creates an uncomfortable synthesis between visual and tactile experience.

Baker is also aware of the debate surrounding ‘sloppy craft’ and is interested to see how it develops. High levels of skill in her work is important to her, as is the rich tradition of stitched textiles. However, at times, she feels that her stitched work needs to be rougher, gestural and emotive, in order to communicate a range of other meanings and leave clear evidence of making. Louise Bourgeois’ needlework has been described as 'grotesque handiwork’ and the ‘deliberate ferocity of bad sewing’. It is clear that she had the skills to make technically perfect textile work but chose a rougher style, challenging the conventions of stitch. Baker sees this in her own practice, as she regards the use of stitch as mark making; her work is far from perfect technically but with it she hopes to subvert the expectations of embroidered textiles.

‘They can be whatever you want them to be’. There is also a playful aspect to Baker’s work. What many people see in the zipped openings is one; sculpting her aging body as an assortment of oddly quilted, saggy body bags is another!

Lou Baker’s sculptures are very distinctive and present an unusual perspective on the rich heritage of embroidery. Using stitch and cloth to conjure notions of absence and loss is very powerful and her work will resonate with many. Her intention is to stimulate thought and provoke discussion by blurring the boundary between craft and fine art. Skilled embroiderers will recognise the textile processes and appreciate the skills involved, but for some, her approach could be problematic. Others, however, will welcome, indeed value, a different approach and appreciate the ways that she pushes boundaries, breaks rules and uses stitch as a vehicle for meaning. 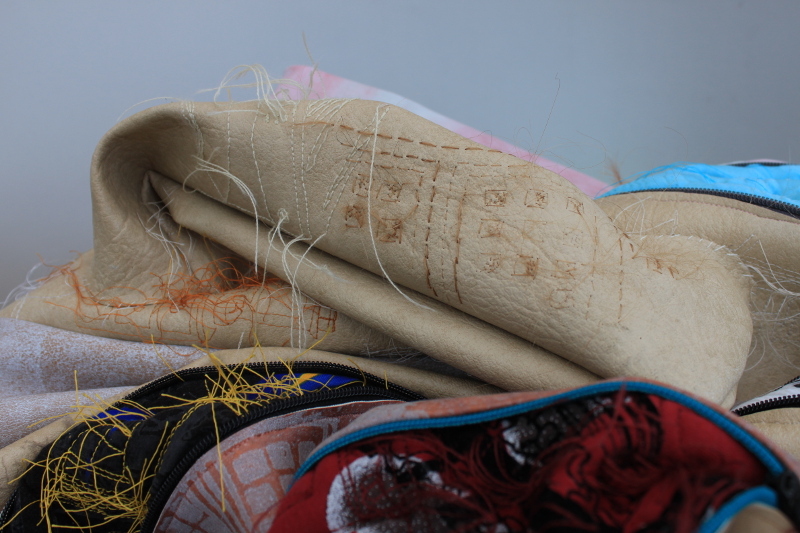